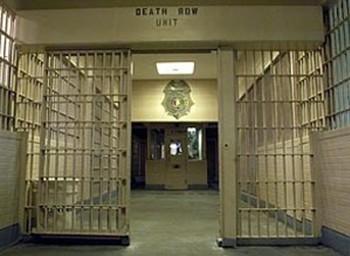 "She will perish in Zordoom"
— The Zoni (telling Clank about Talwyn's capture), Ratchet & Clank Future: Tools of Destruction
Advertisement:

Someone who has been convicted of a capital crime is placed in a special cell on 24-hour watch (to prevent him from cheating the executioner by committing suicide), shortly before his execution is to take place. Often, certain visitors such as the convict's lawyer or a priest, will be allowed to visit him in the last hours before he is taken out to walk to the death chamber. They may be able to request one last moment of personal indulgence or a special final meal.

In some states, a person who has been sentenced to death is put on death row and waits, typically eight years or longer, before "taking the walk"(unless his death sentence is overturned on appeal or commuted to life). Both the cells and the walkway to the death chamber are collectively identified as Death Row.

The warden and executioner may wait by the phone a bit to see if the Governor will call to announce clemency or a stay of execution. Often accompanied by an Acquitted Too Late story. At the execution, the prison doctor is in attendance to confirm the death.

Not to be confused with the record label that was home to Dr. Dre, Snoop Dogg and 2Pac, or the video game with the same title.