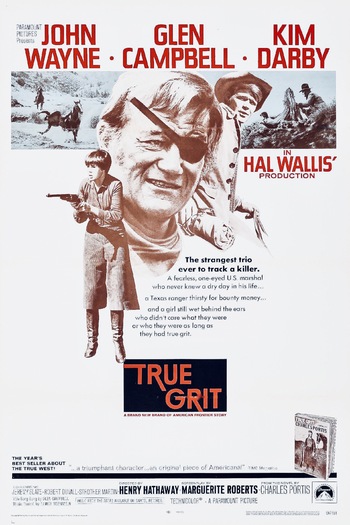 Rooster: I mean to kill you in one minute, Ned, or see you hanged at Fort Smith at Judge Parker's convenience. Which'll it be?
Ned: I call that bold talk for a one-eyed fat man!
Rooster: Fill your hand, you son of a bitch!
Advertisement:

True Grit is a 1968 Western novel by Charles Portis. Its main plot revolves around 14-year-old planter's daughter Mattie Ross, who seeks revenge for her father's murder with the aid of aging U.S. Marshal Rooster Cogburn — a notoriously "double-tough, knowing no fear", one-eyed, drunken badass — and younger Texas Ranger LaBoeuf. The plot involves some chasing, some tracking, some humor, a lot of shooting, the rescue of Mattie from a rattlesnake pit, a one-to-four final showdown of Rooster against bandits, and the final scene of Rooster riding away, proud and alone (sadly, there's no sunset).

The novel has been adapted to film twice. The first version, released in 1969, was directed by Henry Hathaway and stars John Wayne as Rooster (in a performance that earned him both an Academy Award and a Golden Globe for Best Actor), with Glen Campbell as LaBoeuf and Kim Darby as Mattie. The film was followed by two sequels: 1975's Rooster Cogburn (original release title Rooster Cogburn (... and the Lady),

(made for TV, starring Warren Oates).

A second adaptation, released in 2010, was directed by The Coen Brothers. Staying closer to the source material, it places a greater emphasis on Mattie, played impressively by 13-year-old Hailee Steinfeld. Jeff Bridges as Rooster and Matt Damon as LaBoeuf costar, with Josh Brolin as Tom Chaney. The film was nominated for ten Academy Awards, but won none.

Both films and the book provide examples of:

Tropes specific to the original novel:

Tropes specific to the 1969 film

Tropes specific to the 2010 film