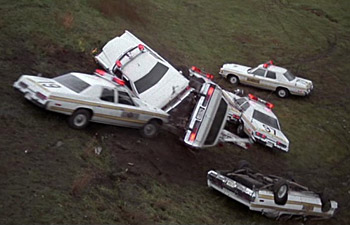 Your tax dollars at work.
Advertisement:

Police involved in a Hot Pursuit will not make even the slightest attempts to preserve their own safety or welfare, or that of Innocent Bystanders. Whatever risky or insane driving the bad (or sometimes good) guy does, the cops will simply follow in his tire tracks, trying to imitate everything he does, no matter how much injury to themselves or damage to their car will result.

If the bad guy plows though a farmers' market, the cops will do the same to chase him.

If he jumps an open drawbridge, the cops will do it too (or at least try).

And if one cop wrecks the rest will mindlessly plow into him, sometimes without even making an attempt to avoid a wreck, 'cause the resulting pile of twisted metal is cool.

Sometimes this is done for humor, but most action movies/TV shows portray this as normal police behavior.

When police are the designated Mooks of a story, they are often also very bad drivers who will probably wreck just driving normally, which only adds to this trope.

Combining this and the fact they have guns makes them an easy stand in for the Redshirt Army in situations where the military isn't likely to be involved and possibly also Adults Are Useless if the protagonist is a kid.

In Video Games, this tends to get exaggerated with cops intentionally trying to crash into the player at full speed and ignoring everything else.

Of course this is quite different from Real Life where police have training and procedures for pursuits. Watch any TV program on the subject and you will see the police are very careful, to the point of backing off and following by air if it looks like civilians will be harmed. Real Life cops will generally terminate (end) a pursuit when it becomes too fast or dangerous. Just as with other kinds of "unprofessional" behavior by the police, though, this trope may be relatively more justified in historical settings, since most police jurisdictions were less regulated and had much more freedom of action before about the 1970s or so.