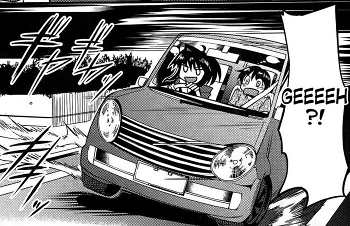 "I stand on my record: Fifteen crashes and not a single fatality!"
"Where'd you learn how to steer?
You do eighty in second gear
When you drive, I can't relax
Got your license from Cracker Jacks
You just hit another tree
These fender benders are killin' me."
— "Weird Al" Yankovic, "She Drives Like Crazy

You've probably dealt with one on the road before. The ones who see yield signs as merely friendly suggestions. They think yellow means "proceed while gesturing" and red lights mean "stop... if you want to". Orange construction signs are to them what red is to a bull. They curse out the oncoming traffic for not diving off the shoulder fast enough. They refuse to use turn signals, so as not to give away their plans to "enemy" drivers. They absolutely do not give one lonely mountain-dwelling fuck about the rules of the road — especially not speed limits. They will probably have a lot of near misses and cause other drivers to have accidents (whether on the road or in their pants, take your pick; meanwhile the maniacs behind the wheel avoid any major crashes themselves, besides perhaps a Fruit Cart, and if they survive, will yell "WATCH WHERE YOU'RE GOING!!"), their car will be covered in dents, any passengers are in for a traumatic experience... and woe betide any driver who dares to pass them. Expect them to pop up on a Sadist Show as a Lethal Klutz sooner or later. If it's very soon, it may overlap with Running Over the Plot.

To the extent that it is still a living trope, this is often a stereotype of women, Asians, Asian women, Southern Europeans, New Englanders (especially those from Massachusetts or Maine), elderly drivers, many a Deranged Taxi Driver, and the Hollywood Police Driving Academy. In Russia, this is associated with Caucasian driversnote as in, from the Caucasus Mountains, not the commonly used term for white people in the rest of the world.

The Trope Namer is the "Weird Al" Yankovic car song "She Drives Like Crazy". Compare Driver Faces Passenger. See also Captain Crash, Dinky Drivers, The Trouble with Tickets, Car Meets House, Drunk Driver, and Kids Driving Cars. Often a cause of Watch the Paint Job or The Precious, Precious Car, or may be a reason someone Does Not Drive. If the driver is deliberately trying to kill someone with their driving skills, that's Car Fu. Someone in a Chase Scene or Wacky Racing can be excused for this sort of behavior, unless they're having far too much fun. If their car looks like a testament to their driving, pray for as smooth a ride as you can get.

Has a complex relationship with Badass Driver, as they both tend to scare everyone around them. The difference is the the Badass Driver actually knows what they are doing, and how to pull off such stunts.

Absolutely Don't Try This at Home or outside. Consequences include but not limited to: suspension or revocation of your driver's license, increased insurance costs, injury, and death.

Rocky does this in the episode The Romantic due to reading a poem while driving causing him to forget to look at the road despite Pennyâs protests.

Rocky does this in the episode The Romantic due to reading a poem while driving causing him to forget to look at the road despite Pennyâs protests.