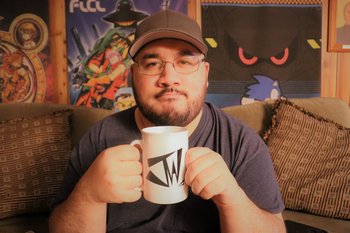 Reviewer, Entertainer, Coffee Drinker
"My name is Juan Ortiz, but some call me Johnny."
"Insert joke about the Void and Exdeath from Final Fantasy."
Advertisement:

open/close all folders
A-I
K-W
"Thank you guys for reading, have yourselves a fantastic night, and take care."