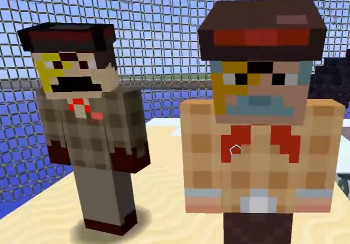 The Minecraft avatars of GameChap (l) and Bertie (r), in the SkyBlock Rumble map
GameChap: I say what ho, chaps and chappettes! GameChap and Bertie here!
Bertie: Yes!
— The intro to just about every video.
Advertisement:

GameChap is the name of one of a duo (named Adamzone Top Marks) dedicated to creating game mod reviews. The two make various Minecraft, Skyrim, and other miscellaneous videograms; esually detailing whatever patch or interesting mod they find. The duo's British accents and over-the-top reactions to events (such as any effect of the Herobrine mod) make each video one CMOF after another.

Be warned; you will laugh. They have a secondary channel which you can watch here

They have made their own forum, which can be found right here.