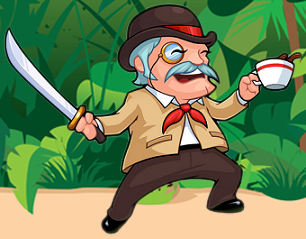 A Undead Horse Trope which used to be common in adventure, mystery, and espionage fiction where the hero was an independently wealthy (or at least doesn't do much work for a living) "gentleman of leisure" whose adventures were initially motivated by a lust for adventure and hatred of idleness, even if the character ultimately acted for heroic/patriotic motives.

He is typically (very) British and/or from the Victorian London era, not only because the mentioned kinds of fiction proliferated in that time, but also because the Victorian ideal of adventuring usually expected the funder, the expeditionary and the scientist to be the same person, who usually had to be a well-educated and even better-to-do eccentric in order to meet the three requirements.

May double as a Bold Explorer and have some overlap with the Adventurer Archaeologist, Great White Hunter and Egomaniac Hunter. Often ends up a Cool Old Guy and insists on wearing an overblown Adventurer Outfit. His Distaff Counterpart is the Lady of Adventure, and if he marries one you can expect a Battle Couple. Is a perfect adversary for the Gentleman Thief, unless of course he is the Gentleman Thief living a double life. Finally, it seems probable that the Rich Idiot With No Day Job is an outgrowth of this character type.

Some contemporary examples are deconstructions, in which the character turns out to be bigoted, cowardly, and an utter Jerkass if not a full-blown Evil Colonialist. Most others are (more-or-less-affectionate) parodies, playing up the eccentricities of the character, putting them in a world as absurd as they are, and/or having other characters comment on the foolishness of the character, though they rarely reach full Butt-Monkey status.

Bears little or no relation to the original meaning, which was what might now be called "venture capitalist" — someone "venturing" their own money on a business venture