Recap / Doctor Who S25 E4 "The Greatest Show in the Galaxy" 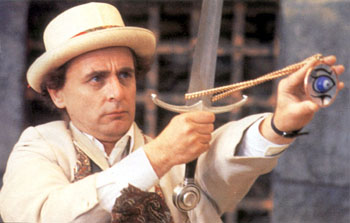 Stand down! I have a medallion!
"You're just an ageing hippie, Professor."
—Ace
Advertisement:

The one with the rapping ringmaster.

The Doctor and Ace get junk mail in the TARDIS and head off to a circus that has, inexplicably, set up shop on a desert planet. They poke around a bit—buying gross food from a travelling vendor, chit-chatting with self-important adventurer Captain Cook and his punk companion Mags, trying to flag down a ride from a Mad Max extra—and utterly fail to notice that this is the sort of circus that people run away from.

In fact, the Circus of Fear has adopted the innovative cost-saving practice of imprisoning its customers and making them perform, with a penalty of death if the audience, who consist solely of a jaded Creepy Monotone trio of mother, father, and little girl, are bored. So it is that Ace and the Doctor promptly find themselves backstage, in an unusually well-secured green room together with Captain Cook, Mags, the Badass Biker guy, and a starstruck über-fan named WhizzKid.

After much sneaking around in the circus's billowing tent backstage, the Doctor and Ace discover that it was once a free-spirited hippie circus of, like, love and joy and freedom, man... until they settled down on this planet, where they apparently all had to sign their circus over to evil gods. Guess they should have read the HOA fine print.

Eventually, Ace and Mags (who turns out to be a werewolf) go to dig a medium-sized mecha out of the desert, which they use to fend off the extremely creepy head clown. Now they just need to find and destroy the evil amulet controlling the circus, while the Doctor is left to amuse the Evil Gods of Ragnarok (the true form of the creepy audience family). He does so by improvising egg tricks, rope tricks, juggling tricks, fire tricks, snake tricks, sword tricks and upside-down escapism tricks, and looks like he could have merrily gone on for a few more hours and is having rather a lot more fun than the Gods themselves. Eventually, though, Ace tosses him the evil amulet through a dimensional portal.

The amulet gets destroyed, which takes out the circus in a giant fireball of evil gods and creepy clowns, and Sylvester McCoy walks unflinchingly—both in-character and in real life—while on fire because the BBC pyrotechnics crew screwed up. note (They planned to do the explosion with an air blast, but brought the wrong equipment and ended up having to do it with real pyrotechnics. There are conflicting reports as to whether McCoy was told about this.)

From "The Greatest Show in the Galaxy". The Seventh Doctor reacts to the implosion of an interdimensional circus in unflappable style.

From "The Greatest Show in the Galaxy". The Seventh Doctor reacts to the implosion of an interdimensional circus in unflappable style.