Their mission is to spread awesome. 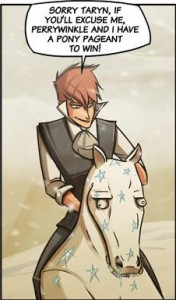 Created by some artist cough, Scott, cough, Nerf This

follows the adventures of the aggressively stylish Chase Connors, his horribly adorable pet monster Monty and their group of oddball friends

. Updating Monday. Wednesday and Friday, this Webcomic has been running since March 2009. Sadly, the comic stopped updating in 2017 and as of 2021, the site no longer exists.

The series is notable for its Mundane Fantastic universe and its later strips being more plot oriented as opposed to a joke-per-strip comic.

Not to be confused with Nerf NOW!! (a gaming comic).

Nerf This contains examples of: