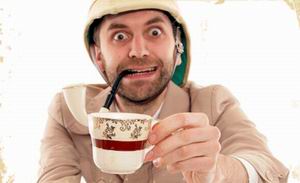 "No; I-I want milk in it. Strong, though; wanna see that spoon stand up."
"I need a cup of the brown stuff, the shade of an acorn,
Made warm by the same source that I take my cakes from,
Using a teapot, a mug or fine china,
Been hooked up to IVs, need constant supplies."
"Cup of Brown Joy"
Advertisement:

Alter ego of British rapper and comedian Paul Alborough, Professor Elemental (also known as MC Elemental) is a Steampunk musical artist and one of the pioneers of "Chap Hop." While not the first to mix hip-hop with steampunk, he is one of the first to put the unique British spin on it that has become known as chap-hop. His character is that of an eccentric upper class Gentleman Adventurer and Mad Scientist from the late 1800s. While his act started out as a piss take (he intended to do an album about rappers throughout history), he has become a major sensation in the Steampunk community, and his rap about his love of tea, "Cup of Brown Joy