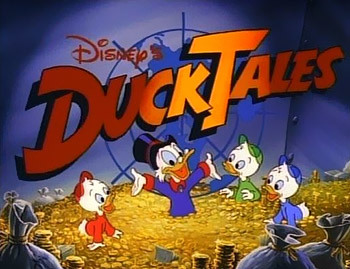 DuckTales is the series that jumpstarted the trend of Disney television cartoons.note Although both The Wuzzles and Adventures of the Gummi Bears preceded it. Inspired by… Carl Barks's classic comics (and loosely adapting a few of his stories), the series centers on Scrooge McDuck, the billionaire uncle of famous Disney rage-a-holic Donald Duck and Donald's triplet nephews: Huey, Dewey, and Louie. The series ran from September 18, 1987 to November 28, 1990.

The show was considered a great risk at a time when big budgets simply were not devoted to made-for-tv animation. It was also Treasure Hunting High Adventure with nary a gun in sight, at a time when violent series like G.I. Joe: A Real American Hero and The Transformers were the top syndicated cartoons. Investing in high-quality animation and music and planning on a future in syndication, with almost no violence? Hah, It Will Never Catch On! Of course, Disney has a tradition of crazy projects becoming huge successes, and DuckTales proved to be no exception. It's considered a breakthrough in the industry, paving the way for the higher-quality, higher-budgeted shows in western animation. With 100 or 85 episodes (the four serials are sometimes counted together) over four seasons , DuckTales was notably one of the longest-lived of Disney's television cartoons (its predecessor, Adventures of the Gummi Bears, lasted for twice as many seasons, but only 65 episodes total). It spun off a theatrical film in 1990, titled DuckTales the Movie: Treasure of the Lost Lamp. Also, the show's two video game adaptation on the Nintendo Entertainment System, like many other Disney-based games developed by Capcom, were examples of truly good licensed games. See VideoGame.Duck Tales for the tropes they give examples to. A remake of the original was developed by WayForward Games and released in 2013.

Example of:
No Waterproofing in the Future