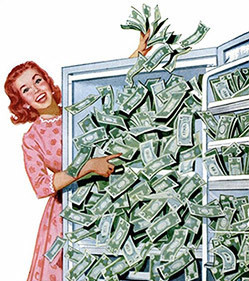 Well, that's one way you can freeze your bank account.
"Members of the jury, an Englishman's freezer is his castle..."
— Horace Rumpole, Rumpole of the Bailey
Advertisement:

Cold Cash refers to people using the refrigerator or freezer as a place to store valuables, usually cash.

The reasons for this vary, either someone is forgetful enough to leave a valuable in the fridge and is searching frantically for it only to find it in the fridge itself, or the fridge is usually the least expected place to find a (non-edible) valuable. Expect a Pun about "frozen assets".

Compare and contrast Empty Fridge, Empty Life. Compare Body in a Breadbox, which refers to something (or rather, someone) else being in the fridge instead of money.

At the end of the episode, it's discovered that the jewels were actually hidden in the freezer which was the one place the robbers did NOT look.