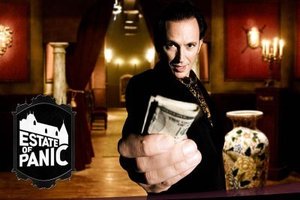 "Awwwww, you don't like my snakes and spikes? Well, TRY THIS!"
—Steve Valentine
Advertisement:

Estate of Panic was a Game Show that had a very brief run on Sci-Fi Channel in 2008, and aired alongside Cha$e, a "live-action video game" show. It was hosted by Steve Valentine and came from the minds of the same folks who brought us Fear Factor. Each week, seven contestants were brought to a "spooky mansion" supposedly out in the middle of nowhere (the show was filmed in Argentina) where Valentine would literally give away his money in a set of three rooms (chosen by him) in his estate. However, there was a huge catch - these rooms were anything but normal; while the players searched for the money, things would happen in the room and/or various creatures would appear to distract and frighten the contestants. Examples included a basement that quickly flooded up to near ceiling level with water, a garden laced with electrical wires, a study that would close in and shrink on the occupants, and other nasty surprises.

The contestants were expected to quickly dash in, grab as much cash as they could find and when they felt they had enough, rush out the nearest exit. Of course, not all of them would make it out... the last one remaining in the room would be "locked in" and thus eliminated from the contest. Those that did make it out would have their money totaled and the one with the least amount of cash was also eliminated. The process would be repeated in the next two rooms which by the third room, the one who grabbed the most money would be given an advantage (usually a tool to make the obstacles easier). Eventually only one contestant remained and would be escorted to the estate's Vault. Here they could add to their winnings by grabbing any cash they found inside; however to even have a chance at this money they would have to get out of the restraints Valentine put them in (e.g., chaining their leg to the floor, hanging them from the air by a harness, or tying them down to a chair) and get out of the vault before the locking mechanism kicked in.

Spiritual predecessor to Exit, a much more recent Syfy offering.

Reality TV Tropes in use: