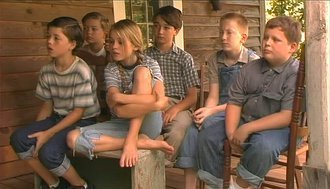 Children's book, radio, and DVD series about a group of kids who live near Sugar Creek in Indiana, who solve mysteries and go on adventures. Originally started in 1939, and still sold today. Very Christian in theme, with many overt references to Jesus, the Bible, and (the Christian) God coming from the characters' dialog and internal monologue. Despite that, the actual stories themselves are a mix between Slice of Life and "Hardy Boys in a rural setting" than anything else, and play out like kids' adventures that just happen to have lots of Christian references.

The Christian references are toned down considerably in the movies, to make them less preachy and more enjoyable to a general non-Christian audience.

Not to be confused with the Sugar ''Hill'' Gang.