Literature / The Story of Ferdinand 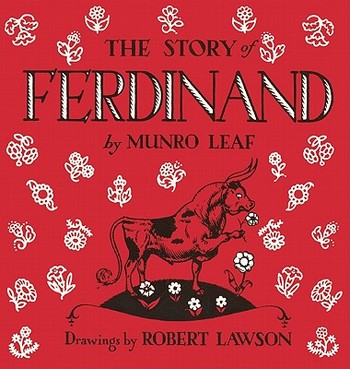 A children's book written by Munro Leaf and illustrated by Robert Lawson, published in 1936, it is the story of a bull who would rather sit down and smell flowers than fight in a ring like all the other bulls.
Advertisement:

One day, several men come along looking for bulls for the bullring in Madrid. At that very moment, Ferdinand sits on a flower being visited by a foraging bee, which immediately stings him, causing him to go off on a wild rampage of destruction, which leaves an impression on the scouts, who take him away to the Great Bullring in Madrid.

Once there, it seems that everyone in Madrid came to watch the fight between Ferdinand and the matador. Once Ferdinand finally shows up in the ring everyone acts scared of him. Someone in the audience throws down a bouquet of flowers, and when he comes charging out everybody runs from him, including the matador, but he stops in the middle of the ring to smell the flowers. Nothing the matador does provokes Ferdinand into fighting him. Eventually Ferdinand is taken back to the pasture, where he lives happily sitting and smelling the flowers.

Adapted as a cartoon in 1938 by Walt Disney as the Silly Symphonies cartoon Ferdinand the Bull. A CGI feature adaptation starring John Cena called Ferdinand made by Blue Sky Studios was released in 2017.