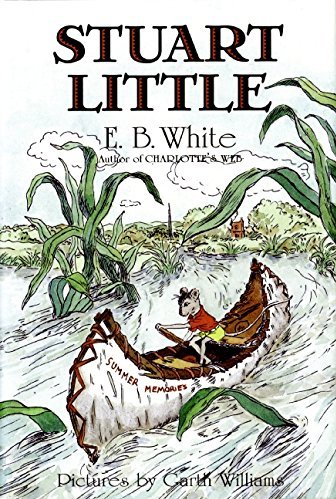 Stuart Little is a 1945 children's novel by E. B. White. It concerns the story of a mouse born to human parents in New York City. The early chapters concerns his everyday life in the City and encounter with a friend who saves his life, Margalo the bird.

When Margalo flies away, Stuart leaves the city in a quest to find her. He acquires a gasoline-powered model car and travels the country. He finds employment as a substitute teacher from time to time. The most notable event includes finding a love interest in his own size, Harriet Ames. They go to a single date before he leaves to continue his quest. The novel has no resolution.

Stuart Little was loosely adapted to a namesake film in 1999, which combined live-action and computer animation, with Michael J. Fox voicing the title character. It was a box office hit, and received two sequels. An animated series was created in 2003, but only lasted a single season, 13 episodes.