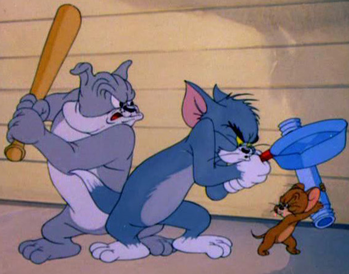 Everyone seems to forget there was also a dog in the show. Including Tom.
"Squids squirt ink to create a substitute to escape their predators. It's an oily substance, difficult to dissolve in water, that becomes a sort of mass. On the other hand, octopi use ink as a smoke screen. It is water soluble in order to spread. Like oil and water, even the inks of the two species doesn't mix."
— Nintendo EAD on Splatoon
Advertisement:

Sometimes, different species, such as cats and dogs or foxes and rabbits note foxes prey on rabbits (and chickens). Cats tend to be rather friendly toward both foxes and rabbits (as well as cavies), are written so that they have a built-in and unquestioned animosity for no other reason than that they are stereotypically considered to be adversaries. A dog that doesn't chase cats will be considered "weird", even if they were raised together from birth. On the other hand, those same dogs will almost never chase after mice unless provoked. Those dogs will also chase squirrels.

Tiger Versus Dragon, Snake vs Frog and Dog vs Monkey appear to be more prevalent in Japanese media, since they're often alluded to in anime and manga. Tiger Versus Dragon started off as an allegorical representation of Yin and Yang, Snake vs Frog is based on an Edo Period "Rock-Paper-Scissors" style matchupnote This was codified in folklore by the famous epic Jiraya Gouketsu Monogatari featuring two ninja rivals, one using toad magic and the other using serpent magic, and Dog vs. Monkey is a stereotype that started when farmers used dogs to keep monkeys away from their crops. So, Dog vs Cat, Squirrel, and Monkey.

Real Life is more diverse. In general cats will flee from larger predators and dogs have an instinctual urge to chase whatever flees from them. But there are also cats who bully dogs. There are also plenty of cats and dogs who get along very easily and even like each other. Both will usually eat mice and rats (which also eat mice), although it is not uncommon for them to befriend the latter.

See also Cat/Dog Dichotomy, Dogs Hate Squirrels, Mailman vs. Dog, and Pets Versus Strays. Related to Elves Versus Dwarves, Fur Against Fang, Snake Versus Mongoose, Tiger Versus Dragon, Spinosaurus Versus T. rex, Bird vs. Serpent, Tanuki/Kitsune Contrast, Elephants Are Scared of Mice and Fantastic Racism. Can overlap with Stock Animal Diet if the relationship is a predatory one. Primate Versus Reptile may also count, a trope likely popularized by King Kong vs. Godzilla.

Gary does NOT take a liking for worms that much, especially when SpongeBob brings home a wild one.

Gary does NOT take a liking for worms that much, especially when SpongeBob brings home a wild one.