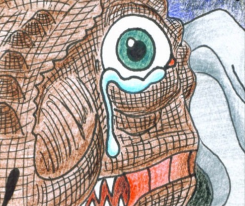 Have you ever seen a T-Rex cry? It's not pretty.
"You might have heard of me before, I am Poharex." —Poharex
Advertisement:

Poharex, a Tyrannosaurus with a Dark and Troubled Past had left his homeland — where he had been enslaved for many years — to seek a new beginning in Mesociam: a promised land where, supposedly, dinosaurs still exist.He makes it ashore, only to find out he got more than he bargained for; there be dinosaurs here, alright, but even here they are enslaved — this time to a giant snake named Darrakith and his smaller serpentine minions.To top it all off, he finds out he's supposed to be The Chosen One who will free the dinosaurs and protect them from all harm.

The series follows Poharex and his friends: the cynic Stegosaurus Eperok, the wise old Diplodocus Etelnaal and the mechanically brilliant yet slightly deranged Ornitholestes Todor as they travel across the land, solve problems and fight the most bizarre enemies, from prehistoric monsters to humans and alien abominations, as well as dealing with their own personal life issues(and dinosaurs have more of these than you'd think).

In addition to the comic series, Holtzman also created video games to expand the series.

The series can be found Here.