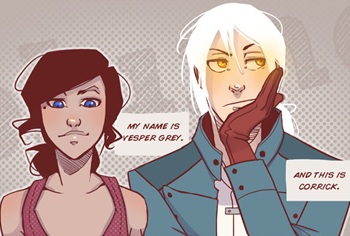 Action Duo Vesper and Corrick are knee-deep in...

is a fantasy/western adventure webcomic written and illustrated by Kari Smith.

It's the times of The Wild West and Vesper Gray is living a rather boring life under the thumb of her strict aunt, dreaming of one day joining her Adventurer Archaeologist father. Things change when she almost dies and is saved at the last moment by Corrick - a supernatural entity bound to protect those who wear an amulet given to Vesper by her dad years ago.

Shortly after Vesper gets used to Corrick's implaceable presence, her father returns to take her with him on his next adventure. Things are going fine until he's killed and his life's work stolen. Motivated by both her desire to reclaim the many magical artifacts and the need for revenge, Vesper (accompanied by reluctant Corrick) sets out to face the Weird West. It's not as easy as she think, though...

As of 2017, the comic has reached its conclusion.