Film / She Wore a Yellow Ribbon 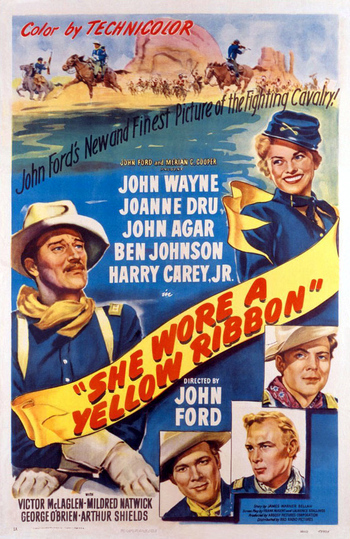 Captain Nathan Brittles: I don't know where you got your brains, Sergeant - God must have given you that pair of eyes. They're Arapahos, alright. Headin' the same way we are. Now why would they be movin' on Sudrow's Wells, Sergeant? Answer me that.
Sgt. Tyree: My mother didn't raise any sons to be makin' guesses in front of Yankee captains.
Advertisement:

She Wore a Yellow Ribbon is a 1949 RKO Western film, directed by John Ford and starring John Wayne. The film is considered the second installment in Ford's so-called "Cavalry Trilogy," which also includes Fort Apache (1948) and Rio Grande (1950). It is the only color film of the trilogy.

The film takes place in 1876 during the Indian Wars, detailing the last mission of the retiring career cavalry captain, Nathan Brittles, who must neutralize the threat of the would-be Indian messiah Red Shirt (Noble Johnson), in which Brittles is aided by Sergeants Quincannon (Victor McGlaglen) and Tyree (Ben Johnson). Meanwhile, pretty Eastern tourist Olivia Dandridge (Joanne Dru), niece of the wife (Mildred Natwick) of the fort's commander, Major Allshard (George O'Brien), has been setting the younger officers of the fort by the heels, particularly Lieutenants Flint Cohill (John Agar) and Ross Pennell (Harry Carey Jr.).

Set against the backdrop of Ford's favorite setting, Monument Valley, Utah, the film was deliberately designed to emulate the paintings of Western artist Frederic Remington. The 41-year-old Wayne's performance as the 60-year-old Captain Brittles impressed critics, and Patrick Wayne reported that this film remained his father's favorite of the many he had made.