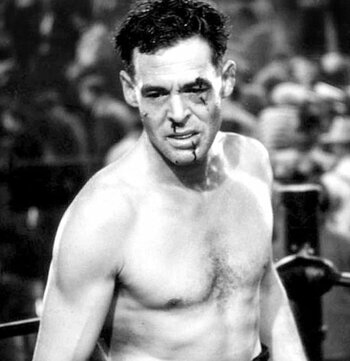 Stoker refuses to go down.
Advertisement:

The Set-Up (1949) is a film noir directed by Robert Wise, starring Robert Ryan and Audrey Totter.

Bill 'Stoker' Thompson (Ryan) is an over-the-hill boxer intent on making a name for himself. His manager, however, has other ideas. Namely, that he loses this fight so he can make a quick buck from the gangster Little Boy (Alan Baxter).

Stoker's wife Julie (Totter) wants him to give up the ring, but Thompson is determined to win the fight against Tiger Nelson (Hal Baylor)– set up or not.