Film / Somebody Up There Likes Me 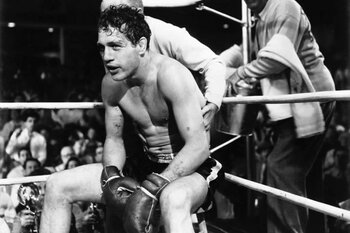 Somebody Up There Likes Me is a 1956 drama film directed by Robert Wise and starring Paul Newman. It is a biopic of middleweight boxing champion Rocky Graziano

, adapted from his autobiography of the same name.

After a prelude which shows little Rocky being beaten by his bitter, alcoholic father Nick, the story proper starts with Rocky (Newman) as a young delinquent still living in Little Italy. He has a gang that keeps busy with various petty thefts. Eventually Rocky's luck runs out and he gets sent to do hard time at Rikers Island, where his hatred of authority and free-floating rage consume him. He completes his sentence only to be drafted into the Army, then dishonorably discharged and sent to Leavenworth for a year after assaulting an officer and going AWOL.

All that rage and hostility, however, leads to Rocky discovering something: that he's really good at punching people. He starts to train as a boxer and immediately finds success. He also finds love in the person of Norma (Pier Angeli), his sister's friend, and they marry. But Rocky is not free of the ghosts that haunt him as he strives to be champion.

Star-Making Role for Paul Newman, who got the part after the man who'd previously been cast, James Dean, was killed in a car wreck in September 1955. The supporting cast includes Everett Stone, Eileen Heckart, Sal Mineo, and Harold J. Stone. Steve McQueen (in one of his first major roles) plays Fidel, a hoodlum in Rocky's gang, while Robert Loggia (in his film debut) plays Frankie Beppo, a hoodlum who causes problems for Rocky. An unknown George C. Scott appears as an extra, playing a prisoner.