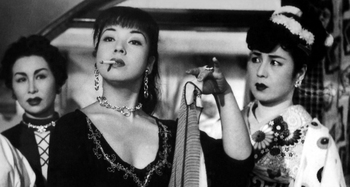 Street of Shame is a 1956 film directed by Kenji Mizoguchi.

It is a story about the various prostitutes at Dreamland, a legally licensed brothel in the Yoshiwara district of Tokyo, long notorious as a Red Light District. Among the women working at the brothel are:

All of this plays out as the news is filled with reports of a bill before parliament that will ban prostitution. (In Real Life this film was credited with helping to get Japan's first anti-prostitution law passed.)