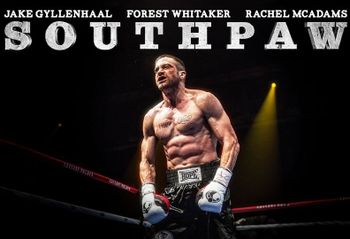 Southpaw is a 2015 sports drama from writer Kurt Sutter and director Antoine Fuqua. It stars Jake Gyllenhaal, Forest Whitaker, Rachel McAdams, and 50 Cent. It was released on July 24th, 2015.

Billy "The Great" Hope (Gyllenhaal) is the Junior Middleweight boxing champion at the top of his game, until he loses his wife Maureen (McAdams) during a brawl at a fundraiser ball. After falling from grace due to drugs and his drive for revenge, Billy seeks help from former boxer Tick Wills (Whitaker) to help get him back on his feet.