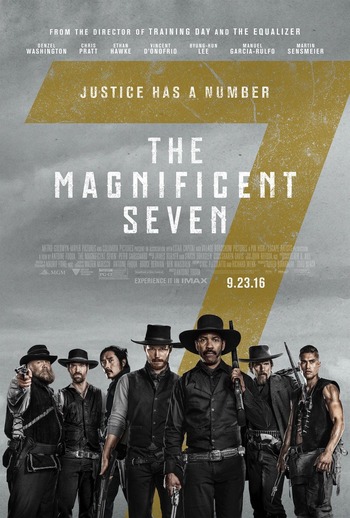 This 2016 American Western action film, directed by Antoine Fuqua and written by Nic Pizzolatto and Richard Wenk, is a remake of the classic 1960 film of the same name (itself a Foreign Remake of Seven Samurai).

In 1879 the evil mining baron Bartholomew Bogue (Peter Sarsgaard) terrorizes the town of Rose Creek, as he wants to drive everyone from their lands so he can have the whole valley for his gold mine. After Bogue murders six innocent townsfolk while delivering an ultimatum, including Matthew Cullen, his widow Emma (Haley Bennett) seeks the aid of a group of rogues and outlaws to help the people of Rose Creek fight against Bogue.

Together the mmix of seven lawmen and outlaws will lead the people of Rose Creek into an epic confrontation against Bogue and his goons.

"Whatever they were in life, here, at the end, each man stood with courage and honor. They fought for the ones who couldn't fight for themselves, and the died for them, too. All to win something that didn't belong to them. It was... magnificent."
Feedback

Never challenge a knife expert in a death battle, as this racist finds out first-hand when Billy impales him with one throw of the former's hairclip.

Example of:
Never Bring a Gun to a Knife Fight

Never challenge a knife expert in a death battle, as this racist finds out first-hand when Billy impales him with one throw of the former's hairclip.