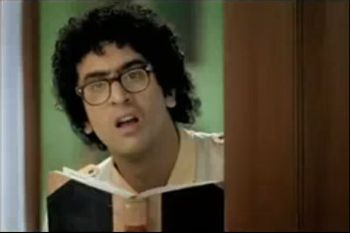 What a typical Bollywood nerd will look like.
People from India portrayed as various forms of geeks and nerds, although almost always on the smart end.
Advertisement:

The West tends to portray Indians as nerds. While many Indians do speak English, this was under Imperial British rule. One possibly apocryphal story relates Ronald Reagan being asked a question about the 1975–77 Indian Emergency and he mistakenly thought he was being asked about American Indians on US reservations.

So as far as Indian characters go, we really only know a few things: One, they have funny accents. Two, they drive cabs and run convenience stores. Yeah, those ain't gonna fly anymore. Three, Indians are so intelligent, they are the source of many white collar job outsourcings as well as stereotyped as doctors. So, obviously, all Indians must be geniuses. And therefore, nerds.

Note that the Bollywood Nerd is much less pronounced in nerdiness than other character types because of where the stereotype comes from — they're intelligent because they're stealing jobs from hard-working Americans. As is such, it doesn't make a whole heck of a lot of sense to show them as being lazy. Your typical Bollywood Nerd will be a scientist, doctor, or just plain normal guy who has an IQ of 153. In other words, what your mom wishes you were instead of wasting your time on this website.

This trope is not as common in Great Britain, where a higher percentage of the population is of South Asian ancestry. However, it did exist to some extent in colonial India, where the British were fond of stereotyping the different ethnicities on the subcontinent. There were some exceptions, but in general Punjabis (from northwestern India and Pakistan) were seen as tough and brave and were popular choices for sepoy troops, while Bengalis (from northeastern India and Bangladesh) were supposedly weak and cowardly intellectuals. In a nutshell, Punjabis = jocks, Bengalis = nerds. This was an egregiously odd racial profile to give them given that the sons of prominent Bengali warrior families constituted more than half the entire British East India Company's mercenary force — indeed, the move to reduce Bengali recruitment and diversify the force was a major contributing factor to the 1857 mercenary rebellion which resulted in the company's dissolution — but then again racial profiling is by definition neither a logically-consistent discipline nor one founded in reality.

Note that actual Bollywood films rarely use this character type. That's because (Get this) Indians are pretty common over in India, so they don't have any trouble giving them diverse roles.

A subtrope of Nerd and Asian and Nerdy. Compare Black and Nerdy, Jewish and Nerdy, and Geek.