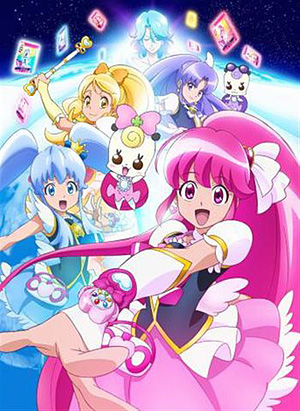 HappinessCharge PreCure! is the eleventh entry in the Pretty Cure franchise, commemorating the franchise's 10th anniversary. It is the ninth separate continuity in the series, and began airing in February 2014.

Hime Shirayuki is the spoiled princess of the Blue Sky Kingdom, which is suddenly attacked by the Phantom Kingdom and their evil "Saiark" monsters. To defend her realm, Hime is granted the power to become one of the legendary Pretty Cure, but finds that she is too cowardly to defeat even a single Saiark.

Hime ends up in the city of Pikarigaoka, Japan, the next target of the Phantom Kingdom. She continues to struggle alone against the Saiark attacks until Blue, a mysterious god of the Earth, gives Hime a "Love Crystal". He tells her to give it to the girl that will be her new friend and partner Pretty Cure. Naturally, Hime decides to chuck it from the top of a building and befriend whoever it hits. It strikes Megumi Aino, a good-hearted but meddlesome girl who happened to be passing by.

Standing up to the attacking Saiark, Megumi unlocks the power of the Love Crystal and transforms into the Pretty Cure known as Cure Lovely. Together with Hime as Cure Princess, the two vow to fight against the Phantom Kingdom while searching for the magical PreCards, a full collection of which will bestow any wish the owner desires. However, they are not alone: they soon form a team with a singing Pretty Cure called Cure Honey, and butt heads against a rival Pretty Cure called Cure Fortune.