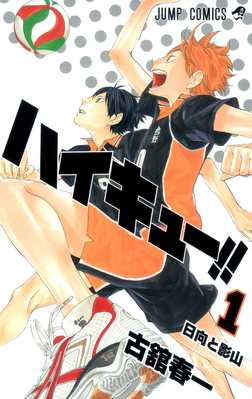 "Before my eyes, it blocks my path. A high, high wall. What sort of view is on the other side? What will I be able to see there?"
— Shōyō Hinata
Advertisement:

In junior high, Shōyō Hinata gained a sudden interest in volleyball due to seeing a match on television, which featured a star player nicknamed "The Little Giant", and yearned to follow in his footsteps to become a volleyball ace despite his short stature. Hinata starts his own volleyball club, which no one joins, and practices rigorously by himself. Eventually he convinces enough people to make up a rag-tag team consisting of a couple of members who haven't even played volleyball before just so he could compete in a tournament. His team is quickly annihilated by Tobio Kageyama - "King of the Court" - and his champion team. After suffering a miserable defeat, Hinata vows to defeat Kageyama and surpass him as a volleyball player.

Upon entering Karasuno High School - the school "The Little Giant" attended - Hinata learns that he's now on the same team as Kageyama. The two must learn to work together so they can restore Karasuno to its former greatness.

Haikyuu!! (meaning "Volleyball") is a manga written and illustrated by Haruichi Furudate, which was serialized in Weekly Shōnen Jump from February 2012 to July 2020, with 402 chapters in total being published. An anime adaptation aired during the Spring 2014 Anime season for two cours produced by Production I.G, and has been licensed by Sentai Filmworks in America. The second season aired as part of the Fall 2015 Anime season, and the third season (subtitled "Karasuno High VS Shiratorizawa Academy") aired as part of the Fall 2016 season. The fourth season, subtitled "To the Top", begain airing January 2020 as split-cours, and the OVA "Land vs. Sky" was released in the same month; unlike the previous OVAs (which are anime original), this one contains manga content and adapts the Tokyo Preliminaries arc which star Nekoma and Fukurodani, taking place prior to Season 4. The series has also been adapted into a series stage plays in Japan since October 2015, called Hyper Projection Engeki Haikyuu!!.

Haikyuu!! also has two Gag Series spin-offs penned by other authors - Let's Haikyuu!!, a chibified yonkoma which parodies the original manga storyline, and Haikyuu-bu!!, which focuses on teams and characters other than the Karasuno boys' team.

Spoilers prior to Season 4 are unmarked.

After a match, Kuroo compliments Hinata then calls him "shrimpy".

After a match, Kuroo compliments Hinata then calls him "shrimpy".