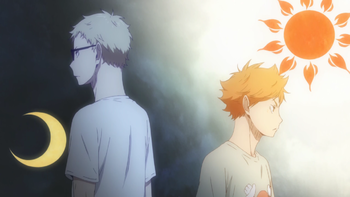 "You are sunlight and I moon
Joined by the gods of fortune
Midnight and high noon
Sharing the sky..."
— Miss Saigon, "Sun and Moon"
Advertisement:

The elemental forces of day and night have always been considered polar opposites. The day, ruled by the sun, is bright and inviting. The night, ruled by the moon, is dark and often considered mysterious. It's no surprise that when two characters have abilities or traits based on these forces, they form a duo of Foils.

Despite their inherent differences, these characters usually form a team rather than fight in opposition. After all, keeping the balance is necessary in works that believe in The Sacred Darkness and Dark Is Not Evil. As such, this duo typically works together, even if it's just an Enemy Mine.

However, any pairing of a sun character and moon character can fit this trope, so long as both characters have abilities and/or traits centered around their element. If the characters have powers, you can expect certain patterns.

Day-themed characters typically have fire or light-based powers and may be associated with holiness, purity, or mental discipline, such as:

Night characters will instead have powers based on darkness, cold, or their connection with the moon, controlling water and the tides:

In fantastic or mythological settings, it's especially common for this dynamic to be embodied by a God of Light and God of the Moon.

Both may exhibit Psychic Powers, particularly a shared Psychic Link. By All Your Powers Combined, they may be capable of deploying a Yin-Yang Bomb, possibly via a Fusion Dance.

Of course, a duo without powers may still apply. In addition, a pairing that merely has some of these powers isn't enough; they must be powers based on their association to day and night, rather than being incidental. A Red Oni, Blue Oni situation will generally have the red oni as day and the blue oni as night.

Sub-Trope of Solar and Lunar and Light/Darkness Juxtaposition. Compare Angel/Devil Shipping, Fire/Ice Duo, and Male Sun, Female Moon, which may both overlap with this trope. See also Cosmic Motifs and Elemental Motifs. Yellow/Purple Contrast is not an uncommon Color Motif for them.

The examples on this page have been arranged alphabetically. Please place your example in its proper spot. Thanks!