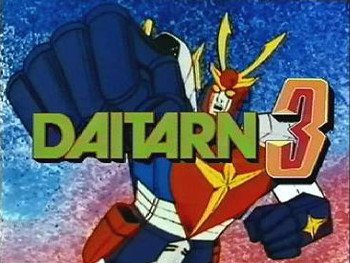 For the world, for the people, Daitarn 3 will smash the ambitions of the Meganoids. If you don't fear the shine of the Sun, then bring it on!
The Unchallengeable Daitarn 3 (無敵鋼人ダイターン3, Muteki Kōjin Daitān 3, lit. Invincible Steel Man Daitarn 3) is an anime series created by Yoshiyuki Tomino and Hajime Yatate, and produced by Sunrise. It was first broadcast on Japanese TV in 1978. The series lasted for 40 episodes. The opening theme Come Here! Daitarn 3 is sung by Makoto Fujiwara.
Advertisement:

Sōzō Haran was a brilliant scientist that was conducting research on Mars. He created a form of cyborg life with the ability to think for itself. These cyborgs, dubbed the Meganoids (メガノイド, Meganoido), soon ran out of control and killed Dr. Haran along with his whole family, save his youngest son, the 16-year-old Banjō Haran.

Banjō escapes from Mars on a rocket with a solar-powered super robot called Daitarn 3, which was built with the special metals of Mars. Now 18 years old and living on Earth in a luxurious mansion, Banjō fights against the Meganoids with the aid of his faithful butler Garrison and his two gorgeous companions, Action Girl and ex-INTERPOL agent Reika Sanjo and his childhood friend Beautiful "Beauty" Tachibana. Oh, and Bratty Half-Pint Toppo, a surprising crack shot who they picked up from a city that got levitated off the ground by the Meganoids in episode 2 and then stays with Banjō & Co. for no apparent reason. Together they must stop the evil Meganoids which aspire to turn all humans into cyborgs and thus "improve" the human race.

Borrowing the power of Observation, here's the finisher! TROPE! EXAMPLEEEESSS!!