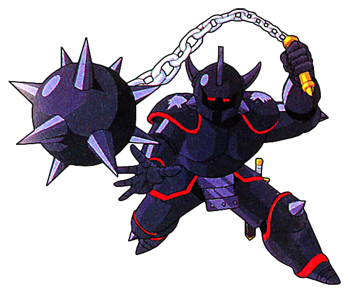 Trevor Belmont: Beautiful...
Sypha Belnades: What on earth is that ugly thing?
Trevor Belmont: I don't believe they hid it. It's the Morning Star!
— Castlevania (2017)
Advertisement:

Can't decide whether to Carry a Big Stick or Whip It Good? Well, Take a Third Option: a large, heavy object on the end of a rope, chain, or cable. Two examples are the mace-and-chain and some varieties of morningstar. Flail/morningstar heads in fiction are usually the size of the wielder's head, if not larger, and realistically would be far too heavy for a normal person to wield in real life (picture swinging around a bowling ball like that, or an Olympic Hammer Throw event and you get the idea). It's also a relatively dangerous weapon, because one false move could wind up either getting you tangled up in the chain, or smashing yourself with the business end of it. Either way, it requires balls of steel to use.

Think of a wrecking ball or something similar, but any bludgeoning-implement-on-a-string probably counts, such as the infamous nunchaku beloved of martial artists and Ninja fans.

For the one specific type of flail: For just the chain, see Chain Pain. Sock It to Them is the improvised version. Compare Spectacular Spinning, Killer Yo-Yo. Stereotypical flails almost always have a spike covered ball at the end, and it's popularity with brutal and/or crazed characters also makes it one of the most common (and popular) examples of Savage Spiked Weapons. If the spiky part is not a part of a weapon, then these are Spike Balls of Doom.

Not to be confused with Epic Fail, though there's a definite overlap if you've somehow smacked yourself in the head with it

and maybe gotten the pointy bits embedded in your face. Also not that thing Kermit does when he's excited

Midbus spins around with a ball-and-chain before throwing it at Bowser.

Midbus spins around with a ball-and-chain before throwing it at Bowser.