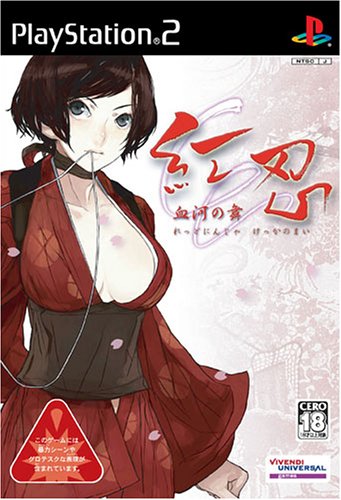 A silent and deadly flash of crimson.
Red Ninja: End of Honor, known in Japan as Red Ninja: Kekka no Mai (紅忍 血河の舞 Reddo Ninja Kekka no Mai) ("Red Ninja: Blood River Dance"), is a 2005 Video Game for the PlayStation 2 and Xbox platforms, created in a collaboration between the game developer Tranji Studios and the film writer Shinsuke Sato. It was published by Vivendi Games. The game's theme song was performed by Yoko Ishida.
Advertisement:

A young girl's world is destroyed when she and her father are attacked by the Black Lizard clan. After witnessing the brutal execution of her father Ryo, the girl is brutally hung with a tetsugen ("iron string", or "wire") from a tree and left to die. Miraculously, she survives and is rescued and adopted into a ninja clan where she obtains complete mastery of her adopted weapon, the tetsugen. Pledging her undying loyalty to her new family, the girl now takes on the name of Kurenai to avenge her father's death and will go to any means necessary.