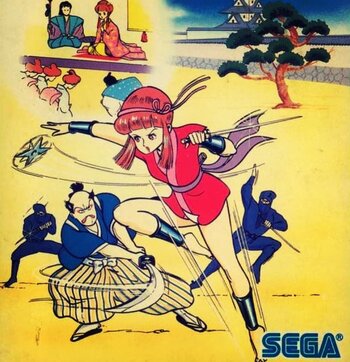 Your highness on the cover art.
Advertisement:

In Edo-period Japan, an evil tyrant named Gyokuro has plans of taking over the throne, the first step being kidnapping Princess Kurumi, the Shogun's daughter, who's out on a trip with her courtiers. But surprise surprise, Princess Kurumi turns out to be a Ninja (in a game originally called "ninja princess", what a twist!) and easily escapes her captors, at which point she embarks on a solo quest to take down Gyokuro and his minions.

Gameplay-wise, Sega Ninja follows the usual style of Run-and-Gun-style arcade games popular back then (despite being set in an era before guns existed), with the titular heroine chucking shurikens and knives - of which she seems to carry an infinite amount - at various foes. Sega would adopt the template for Ikari Warriors a year later, and the rest is history.

Sega would later release an Expansion Pack for the game, titled "The Ninja", which is pretty much a reskinned version with a new character named Kazamaru as the protagonist.

The Ninja contain examples of: