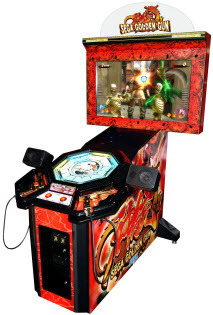 The story revolves around two college students on a trip to China when the city they're in is suddenly attacked by mystical creatures such as dragons, clay soldiers, and lion statues for example. While trying to run from the chaos, a security guard hands the two the titular golden guns to defend themselves with. Thus the two take it upon themselves to get to the source of the creatures and try to stop them.

The theme of the game follows pretty much the Three Kingdoms – Shu, Wei, Wu (aka Romance of the Three Kingdoms). Why would Sega make such an odd premise for a light gun game? Well cause the China division of Sega were pretty much the one to develop it, so there ya go. Essentially, it's just House of the Dead but with Chinese mythology (helped along by the fact the engine used in the game was also used in House of the Dead 4). Though one main difference is that you can occasionally run into a shopkeeper who will sell powerups and life with your score, without affecting your final result.