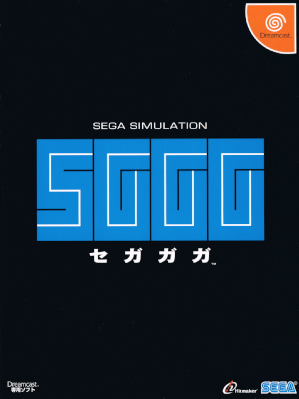 The year is 2025. Sega only has 3% of the market share left. The other 97% of the video game market is taken up by DOGMA. As the last stand against DOGMA's threat of a total monopoly, Sega launches Project Segagaga as a last ditch effort: Find somebody on the street who will be able to reclaim Sega's lost territory in the market and bring proper competition back to the industry. One of these people is a teenager appropriately named Taro Sega.
Advertisement:

Released for the Sega Dreamcast in 2001, Segagaga is a parody of the brief and rather one-sided rivalry between the Dreamcast and the PlayStation 2. While it's, at its core, an RPG and game company simulator, everything else about it is wacky and zany. Your grunt-level programmers resemble Moai statues and fuzzy monsters, the characters are real and do double-duty acting in the games and working for the company (with a few exceptions), and every game that Sega under Taro's leadership develops and publishes pokes fun at some other game on the market, such as Dalai Lama.

As the game goes on, DOGMA recognizes Sega as a financial threat, eventually taking the battle into space. That's the sort of game this is.