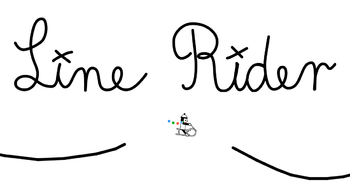 Line Rider is a 2006 web game. You can use various different types of lines to draw a sled track. Then you hit the play button and watch a sledder named Bosh travel through your track.

The 2008 sequel Line Rider 2: Unbound has additional features and a campaign mode with puzzles. It tells the story of Bosh wanting to get Bailey's love and get the ultimate sled by going up against Chaz.