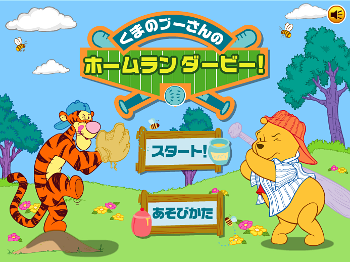 Winnie the Pooh's Home Run Derby is a 2007 Japanese Flash baseball video game published at the Disney website. The player controls Pooh in order to defeat his eight friends in a baseball's home run challenge. The game won a cult following in early 2013 and became a viral hit due to its extreme difficulty.

The brutal difficulty, thanks to the Internet, has lead to the common interpretation that all of the pitchers are either sadistic assholes or supernatural beings comprised of pure evil. This is especially true with the final pitcher, Christopher Robin himself. The Darth Wiki version of this page is an example of how the setting is exaggerated into a Cosmic Horror Story.

On July 4, 2019, it was announced that the Flash game will be officially discontinued in December 2020, which is the same time that Adobe Flash itself will be discontinued.