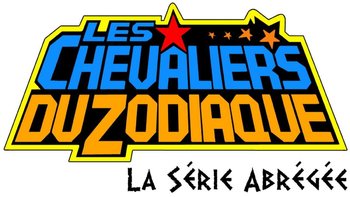 NEON KNIIIIIGHTS!
"Only the Pope will be able to remove the golden arrow... He's our worst enemy, but I'm sure he'll accept if we ask nicely."
— Saori
Advertisement:

Les Chevaliers du Zodiaque : La Série Abrégée ("Saint Seiya: The Abridged Series"), often referred to as "CDZA", is a French Abridged Series created by StateAlchemist in 2009, based on the Saint Seiya series. It holds the honor of being the very first French abridged series, and is still the most popular and well-known one among French viewers to this day.

The series focuses on the "Twelve Zodiac Temples" arc, and spans over thirteen episodes; each of the first twelve episodes focuses on a specific Zodiac Temple, with the thirteenth and last episode concluding the story arc with the battle between Seiya and the Pope. Most of the humor of the series revolves around character exaggeration, pop-culture references, jabs towards the French localization of the show, and especially non-stop wordplay.

The series ended with the release of the final episode in April 2014. Since then, StateAlcheimist has moved onto other projects, most notably a series parodying old Marvel cartoons, titled Marvel Comique

The entire series can be viewed either on the official website