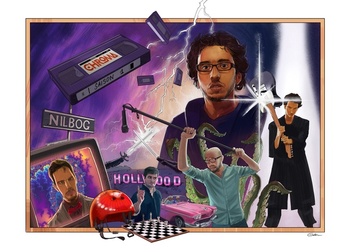 Chroma is a French Web Video series hosted by Karim Debbache acting as the Spiritual Sequel of Crossed, during which Karim once again talks about movies and cinema in general. The first season was made between January 2016 and May 2017, each episode focusing on a different movie and delivering a particular message or food for thought about cinema.
Advertisement:

Funded popularly on Ulule, Chroma got a budget of a whooping 200,000€, allowing the show to have more special effects, a completely redesigned setting for the show, and creating an overarching plot besides the movies each episode is focused on.

Since the plot involves parallel universes, here are the characters for the sake of clarity:

The first (and so far only) season is complete with 12 episodes: