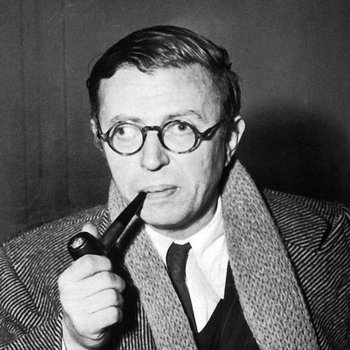 Man is condemned to be free; because once thrown into the world, he is responsible for everything he does.
— Sartre, Being and Nothingness
Advertisement:

Jean-Paul Charles Aymard Sartre (1905—1980) was a philosopher, playwright, novelist, literary critic, screenwriter and political activist. He is acknowledged to be one of the most influential and controversial philosophers of the 20th Century. He is known to be the Father of Existentialism, the man who identified its precursors, codified it in a body of work that went on to become highly influential in the second half of the 20th Century.

Sartre was born in a middle-class family, which as he noted in his memoirs, The Words, appeared to be a nuclear family but was in fact highly fragmented. His father was in the navy and was mostly not at home, and he died young. His mother then moved to her village and as a result Sartre was practically Raised by Grandparents. The young Sartre was mostly left alone at a young age, filled with insecurity about his ugly looks (his famous Fish Eyes which got him teased and bullied) and his love of literature. From an early age, Sartre was conscious of loneliness and alienation. Things did improve for him at the famous École Normale Supérieure, where Sartre became a fairly popular student, known for his brilliance, wit and his fondness for pranks. It was there that he met Simone de Beauvoir. His work during this time was as a literary critic and novelist. Nausea was published in 1938. When World War II broke out, Sartre served the Army as a meteorologist and was captured in 1940, after French defeat. He was detained in a POW camp for 9 months before being released on April 1941 because of poor health. Sartre was opposed to the Occupation but his participation in La Résistance was restricted until the Liberation in 1944. He did try to form an underground journal and newspaper but this petered out, and Sartre mostly focused on doing his own research.

It was during the war, that Sartre wrote his major works including his play No Exit and Being and Nothingness. In 1944, he met Albert Camus and they began a friendship that lasted until 1951. In the immediate post-war era, Sartre wrote Anti-Semite and Jew, an analysis of the anti-semitism that led to the collaboration, the rise of Nazism and The Holocaust. He also launched his famous journal Les Temps Modernes. Central to Sartre's ideas was Existentialism, a call for radical freedom and responsibility. Related to this was the idea of engagement, i.e. a writer and philosopher must engage with his surroundings and participate in the social issues of his time. Sartre sought to appeal to a larger audience by writing on issues outside the academic world of philosophy, by writing for newspapers, magazines and working as a journalist and cultural critic. Sartre wrote on various political issues and he was especially committed to decolonization (he was a vocal supporter of Algerian Independence), sexual freedom and anti-racism. He continued to work as a novelist and playwright. He even wrote the screenplay for John Huston's Freud: The Secret Passion but withdrew credit upon having his script shortened by Huston (even if Huston notes that most of the film was written by him). His most important work after the war is Critique of Dialectial Reason among his philosophical works and Saint Genet and The Family Idiot among his works of literary criticism.

Politically, Sartre was attracted to Marxism but for most of his career he served as a "fellow traveler". He was often accused by his critics of being soft on Stalinism and for suppressing information about the Katyn massacre, as well as his support for Fidel Castro and Che Guevara. Sartre did criticize the Soviet invasion of Hungary as well as the Doctor's Plot of Stalin, and the homophobic crackdowns in Cuba,note In an interview with Spanish cinematographer-film-maker Nestor Alemdros, Sartre said: "In Cuba there are no Jews, but there are homosexuals", likening homophobia to antisemitism in Germany but seemed to many to be far more harsh on the United States and France then he was on the Iron Curtain. Communists criticized existentialism for being a bourgeois philosophy of freedom that seemed to appeal mainly to middle-class teenagers, the kind who eventually broke out in protest in May'68 (and revolted against Gaullism and the French Communist Party). The academic Edward Said likewise slammed Sartre for being too pro-Israel. His introduction to Frantz Fanon's The Wretched on the Earth remains controversial for Sartre's vocal support of African rebels killing European civilians.note That may have been an unfair reading of the preface by scandalized Westerners. The actual wording Sartre used, as well as the context — in a preface for a book about the psychology of colonial oppression — indicates that at the very most he sympathized with the desire some African rebels had to kill European civilians, and that the hypocrisy of European colonists indirectly caused such violence. His poetic description of the act of killing the European doesn't help, as it gives the wrong impression that he is lionizing this sort of violence rather than simply describing its psychological impact. Regardless, Sartre was considered sufficiently influential that his funeral in 1980 was greeted with a parade of 50,000 mourners.

Sartre greatly influenced post-war writers such as Roland Barthes, Claude Lanzmann, the Nouveau Roman writers, the French New Wave, Iris Murdoch, Paul Schrader, Woody Allen among many others. He was considered a heroic figure among 60s radicals in France and the Anglophone and even Charles de Gaulle on learning of his arrest during May'68, ordered his release, stating "You don't arrest Voltaire''. Most famously, Sartre won the Nobel Prize in Literature in 1964, but rejected the award. Almost equally famously, he also claimed he occasionally saw crabs everywhere, as an after-effect of his brief experimentation with hallucinogenics.