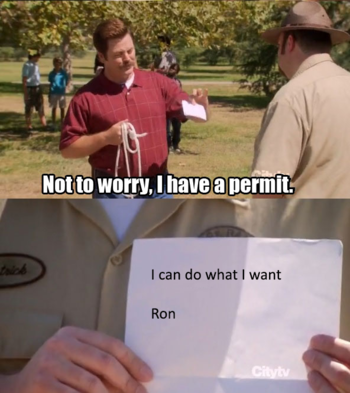 There are many circumstances where a character may need to present a badge or other official credentials. They may be entering secured premises, performing a Flashed-Badge Hijack, or presenting a permit that authorizes them to perform a restricted activity. But if the character is the The Klutz, an Unfortunate Item Swap in the heat of the moment will leave them mistakenly flashing a similar, but irrelevant, object they might also be carrying in their wallet or on their person— such as a gym membership card or personal photo.

If the character doesn't actually have the necessary ID, they will present a very crude fake document of laughable quality. For example, an ID drawn in crayon, or a plastic police badge from the toy store.

Even if the document isn't blatantly fake, the character is likely to anti-climatically hold it upside down. Other variations include making a funny face in the ID photo, or the card text containing humorous or non-sensical details (usually a Freeze-Frame Bonus).

While the token of identification can consist of plastic ID cards, metal badges or shields, or paper-based certificates, the physical medium is not relevant to this trope. This trope applies to how the item appears, or how it is presented.

If the inadequate credentials actually pass muster and the bearer is granted entry, then The Guards Must Be Crazy.

If the person presents cash as a means of getting their way, see Screw the Rules, I Have Money!.

Holding the badge upside down
Advertising

Multiple categories apply or other
Film