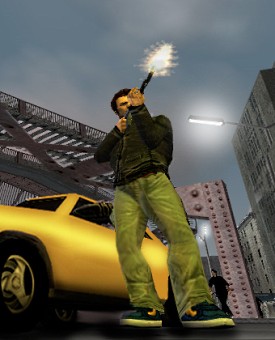 Since the 19th century, the boroughs of New York City, or the No Communities Were Harmed versions, have been characterized as having some of the toughest, angriest people you will ever meet. Perhaps it was all the immigrants clashing against each other. Perhaps it was all the gangs that sprouted in the poorer neighborhoods. Whatever the reason, anyone from The Big Rotten Apple is someone you don't want to mess with.

The type of character can vary, often a badass with a Hair-Trigger Temper. Will sometimes be part of The Mafia, and also a stereotypical attitude a New York cab driver, at least in fiction. Even if he's one of the good guys, someone with a Brooklyn accent is bound to be tough nonetheless.

Compare Joisey, Violent Glaswegian, Southies (place your bets now!), Rambunctious Italian (since many New Yorkers are of Italian descent) and The Big Rotten Apple (for the place itself).

Has a Brooklyn accent and is easy to anger.

Has a Brooklyn accent and is easy to anger.