Film / A Guide to Recognizing Your Saints 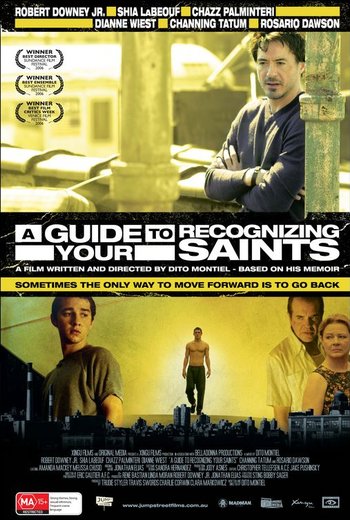 "I need to remember what these people meant to me. What they mean to me."

"My name is Dito...and I'm gonna leave everyone in this film."
—Dito Montiel

A Guide to Recognizing Your Saints is a 2006 Coming of Age Story, based on director Dito Montiel's memoirs of his childhood in Astoria, New York. The film has two narratives - the present day in 2005 and Dito's teen years in 1986.

Dito in the present day is now a successful musician and writer but has been estranged from his family for fifteen years. He is persuaded to return to his hometown with the news that his father is ill. He reflects on the summer of 1986, where he dated a girl called Laurie, he befriended a Scottish immigrant called Mike and his best friend Antonio was at constant odds with a local Puerto Rican gang.

A Guide To Recognizing Your Saints freely breaks the fourth wall, employing a few curious Postmodernism tricks along the way -including having excerpts from the script captioned on-screen, while the actors are saying their lines. Dito freely tells us who will die before he properly starts the story too.