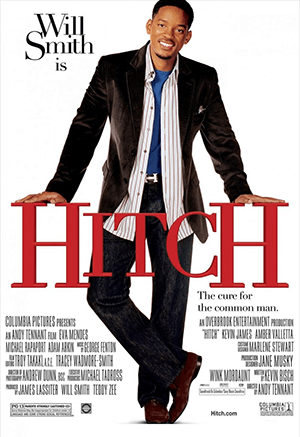 "No matter what, no matter when, no matter who—any man has a chance to sweep any woman off her feet. He just needs the right broom."
— Hitch
Advertisement:

In New York, there are rumors of a man called the "Date Doctor" who gives advice to Unlucky Everydudes and Dogged Nice Guys on how to get the affections of the ladies they admire. It turns out the "Date Doctor" really does exist—his name is Alex "Hitch" Hitchins (played by Will Smith). He gets hired by Albert Brennaman (Kevin James), who is a meek CPA in love with the beautiful and sweet heiress Allegra Cole (Amber Valletta). Meanwhile, Hitch bumps into Sara Melas (Eva Mendes): a rather cynical gossip columnist, and the two hit it off. Despite all of his expert advice and knowledge of women, all of their dates turn into crazy mishaps. But somewhere in there, they begin to fall for one another...