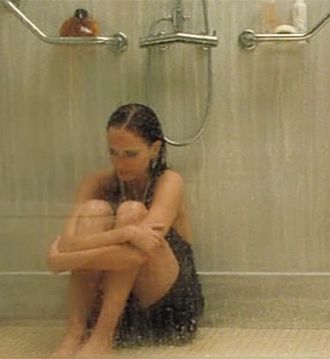 Will all great Neptune's ocean wash this blood clean from my hand?
Spencer: She takes really long showers when she gets depressed.
Sam: Well, when do you think she's going to come out?
Spencer: I don't know. She took a chair in there.
— iCarly
Advertisement:

A character (often female) has had a rough day. She's suffered some sort of physical or emotional trauma that makes her want to run home and curl up into a ball.

Naturally, the first thing the woman wants to do is go home and take a nice, long, hot shower. This is not surprising; many people find the best way to relax after a hard day is to take that shower, put on fluffy pajamas, and just let it all go. Water is also an archetypal purifier in general, capable of symbolically washing away sins or past events — though that doesn't mean it'll work.

Of course, when it comes to fanservice, these showers of angst are solid gold. You can't argue with the titillation provided by seeing a hot-bodied person nude, soaking wet, and in desperate need of support (though in most cases of Shower of Angst, the person showering will be so distraught or depressed that he or she will shower with clothes on, resulting in a Sexy Soaked Shirt scene). However, in some cases, this can border on creepy, such as when a woman takes a shower of angst after being physically or sexually abused (or is suicidal and trying to kill herself by slashing her wrists and letting the running water bleed her dry). That particular version of the trope is common in soap operas, most serious movies, and cable dramas.

The post-rape shower also has ramifications in a Crime and Punishment Series scenario — if the victim takes a shower before a SAE kit has been collected, then vital forensic evidence is lost. Unfortunately, it's Truth in Television.

Men are not in the least exempt from this trope, since every shower scene is also a Shirtless Scene. The male variant often features a hunky male leaning towards the wall, with the water running down his neck or falling on his back.

Contrast Redemption in the Rain — a joyful, liberating shower in the rain. Can also be an instance of Out, Damned Spot! if the showering is because a character is trying to wash away guilt. Sister Trope of Bathroom Stall of Angst.

When Archie is taking a depressing shower over his father being in the hospital, Veronica slips out of her clothes and joins him in order to cheer him up.

Example of:
Shower of Love

When Archie is taking a depressing shower over his father being in the hospital, Veronica slips out of her clothes and joins him in order to cheer him up.