Singing in the Shower 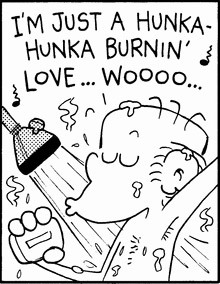 A character is shown singing or humming while bathing or said to do this — depending on amount of Censor Steam and Censor Suds the author uses.

That being a small room with hard walls, its acoustics should be bad enough to resign all worries about voice and quality. Add to it that during the bath time one is alone (usually) and feels secure (usually), and it makes more or less a light-hearted version of What You Are in the Dark. Though usually someone overhears the singing character anyway. As a narrative device, this usually is an opportunity to show that the character is in good mood and to demonstrate amusing quirks.

Mostly a Comedy Trope. Happens a great deal in Real Life, too.

Will Schuester is once again inspired to kickstart his glee club after finding the school quarterback belting in the shower.

Will Schuester is once again inspired to kickstart his glee club after finding the school quarterback belting in the shower.