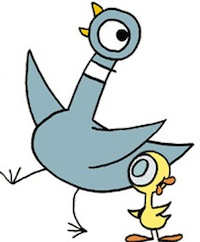 The Pigeon series is a set of children's picture books by writer/illustrator Mo Willems (some of you might recognize him as creator of the Cartoon Network series Sheep in the Big City). The first book in the series, Don't Let the Pigeon Drive the Bus!, was released in 2003. In it, a bus driver who has to take a break asks the reader to watch the Pigeon, who then tries to finagle the reader into letting him drive the bus. Its runaway success spurred the release of other books, videos, and merchandise. There is even a musical

The Pigeon also makes cameos in many works by Mo Willems, most notably the Elephant & Piggie series.