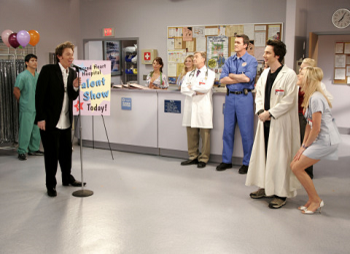 This is a plot where the characters participate in an amateur talent contest.
Advertisement:

The plot usually begins with the character needing some money or something similar and the upcoming talent contest has a cash prize that suits their needs. So, they rehearse and usually create a professional level act, usually a musical number.

The special thing with this plot that the heroes typically never win the contest, or at least not in circumstances they were expecting. When they do lose, they take the loss gracefully, but find they have earned something far better for their efforts such as a business owner wants them to be his establishment's house band or a record label agent wants to sign them on.

Tropes that might appear during this plot include Crack Defeat, Dark Horse Victory, One Judge to Rule Them All. See also Failed Audition Plot.

If you're looking for a television show that is all about showing off talents, see Talent Show.