Series / The Dukes of Hazzard 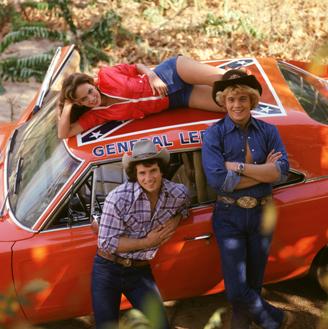 Yeeeee-Haaaw!
Just the good ol' boys, Never meanin' no harm
Beats all you never saw, been in trouble with the law since the day they was born
Straightenin' the curves, flattenin' the hills
Someday the mountain might get 'em, but the law never will

Makin' their way the only way they know how
That's just a little bit more than the law will allow
Just the good ol' boys, Wouldn't change if they could
Fightin' the system like a-two modern day Robin Hoods.
— Waylon Jennings, "Good Ol' Boys (Theme from The Dukes of Hazzard)"
Advertisement:

The show follows the adventures of "good ol' boys" Bo (John Schneider) and Luke (Tom Wopat) Duke, two paroled ex-moonshiners who live with their Uncle Jesse (Denver Pyle) and cousin Daisy (Catherine Bach) in fictional Hazzard County, Georgia. The boys spend much of their time tweaking the nose—and thwarting the schemes—of corrupt county commissioner Jefferson Davis "Boss" Hogg (Sorrell Booke), who always has his eye on acquiring the Duke family farm. Hogg retaliates by keeping the incompetent Sheriff Rosco Purvis Coltrane (James Best) constantly on the Dukes' trail, in the hopes that they'll violate their probation and get sent back to prison (and out of his hair).

The series is remembered for its wild car chases, charming Southern setting, and Catherine Bach's near-criminally short shorts, which subsequently acquired her character's name as a generic term: "Daisy Dukes."

A big-screen adaptation of the series was made in 2005, starring Seann William Scott as Bo, Johnny Knoxville as Luke, Jessica Simpson as Daisy, Willie Nelson as Uncle Jesse, and Burt Reynolds as Boss Hogg, with a 2007 made-for-TV prequel. Two made-for-TV reunion movies with the original cast were also made, in 1997 and 2000. (What's often forgotten these days is that the original series was itself a loose adaptation of a 1975 theatrical film called Moonrunners

, which featured essentially the same premise and the same characters under different names... or, in the cases of Uncle Jesse and Sheriff Rosco Coltrane, the same names!)

Besides adding to the desirability of 1968-69 Dodge Chargers, the show was also a major contributor to their rarity, having variously damaged, wrecked and/or demolished more than three hundred of them over the course of its run.