Series / Dude, What Would Happen? 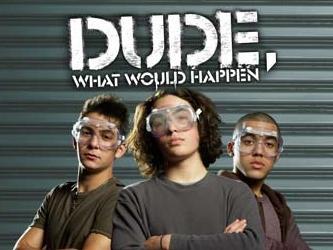 Dude, What Would Happen? is one of a slew of reality shows produced by Cartoon Network for the infamous CN Real block in 2009. It and fellow show Destroy Build Destroy were both cancelled on September 21, 2011, making them both the longest-running CN Real shows.

The show attempted to be a kids' version of MythBusters, only they don't deal with myths, old wives' tales, or things kids might actually ask. In practice, it was more along the lines of Jackass for kids. The titular Dudes - C.J. Manigo, Jackson Rogow and Ali Sepasyar - are usually given a question, and then use it as a jumping-off point for shenanigans ensuing. For example, what sticks to peanut butter on an inclined surface longer (one of the substances they used in testing was more peanut butter), if covering a piano in deflated basketballs would make it bounce, or what would happen if you popped the world's biggest zit (which they "solved" by filling a punching bag with cream and dropping it off a building).

The show is often regarded as being The Face of CN Real; and as such, attracted quite a lot of controversy from animation enthusiasts at the time. Even to this day, bringing up the show around fans of animation will often spark an intensely negative reaction. Despite this, the show ultimately ended up outlasting the block itself.

Despite all this, the dudes themselves often still regard their time on the show fondly. To them, it didn't matter how it was received; the sheer amount of insane stuff they got to do on the show made it worth it for them.